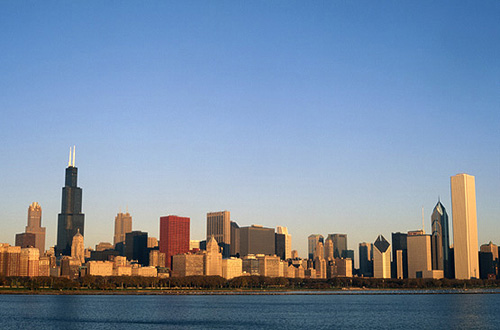 In contrast to the traditional European city, the North American city lacks the historical background. Many cities are relatively young and you will look in vain for city walls, historic marketplaces or residences. North American cities are seldom built around a center point or aligned with it. Exceptions are occasional courts or train stations. The cityscape of American cities is characterized by a uniform, chessboard-like course of the streets. The checkerboard-like street pattern exists in almost all small and large cities.
Since the middle of the 19th century, the basic pattern of North American cities has developed, which is generally divided into downtown (inner city area), transition zone and suburban area. To this day, the use of the various city zones has changed constantly. From 1915, construction of the first skyscrapers began in the downtown area. The reason for this was not only the constantly rising land prices, but also the lack of space in the city center at the time. The business center (also CBD = Central Business District) developed in the area of ​​the core city. There are banks, insurance companies and the like in the CBD. Negative side effects of this development are an increased volume of traffic, which is particularly problematic at "rush hour". The skyscrapers also influence the urban climate, for example through the formation of wind currents and permanent shadows. Many residents moved, inter alia. because of the high land prices and more attractive residential areas in the outskirts. This process is known as suburbanization.

Suburbanization is not only limited to the resident population, it is also used to describe the relocation of jobs and economic activities to peripheral locations in the city. Since many people moved to the outskirts, shops and offices soon followed in the outskirts of the cities. As a result, many people no longer had to go to the center to work or shop there. This created new and smaller centers on the outskirts of the cities. The so-called commercial strips are mostly located along the highways and arterial roads. This development is in turn referred to as the decentralization of city functions. One of the reasons for this lies in the lack of urban planning on the part of the municipalities; in North America, there is no such extensive system of rules and laws for urban planning as e.g. in Germany. Disadvantageous phenomena are increasing urban sprawl and urban sprawl into the surrounding area. In the meantime, socially weaker groups are moving to the former districts of the affluent population. In these so-called slums, not only are the buildings deteriorating, but there is also a lack of important infrastructural facilities such as schools and hospitals. These slums are often the refuge for immigrants and illegals, partly because of the lower rents. Many North American cities have developed into dual cities as a result of the self-reinforcing processes of suburbanization and the decline of traditional core cities or transition zones.

At the latest, the mass spread of the automobile has contributed to the ongoing changes in urban development in US cities. In the last few decades in particular, the traditional image of a city with recognizable external borders has disappeared. The centers in the metropolitan outer ring that have emerged as a result of suburbanization and decentralization are known as Edge City (freely translated: Randstadt). These sub-centers have all the functions of a city, although they are hardly perceived as such spatially scattered. Until a few decades ago, the new centers were mostly still isolated villages and sleeping quarters. Soon, however, more and more supply options and jobs followed, which developed into a new coherent unit in the awareness of the resident population. The Edge Cities thus have the essential characteristics of a city that is largely independent of its former core city.
New office parks and industrial parks were built along traffic axes. The old areas of traditional (heavy) industry went into decline for various reasons. New industries were (and are) independent of railway and waterway connections and therefore these companies were able to set up in locations in the city's surroundings. The growing importance of the service sector has also supported the relocation of jobs. In the research-oriented industry, well-trained workers are usually required, who mainly live in the suburbs.
A new form of suburban living, known as gating, is currently developing. This includes the fencing and walling of apartment blocks, districts and communities. The proportion of so-called gated communities has increased significantly since the late 1980s. A distinction can be made between three main types: by lifestyle, by exclusivity and on the basis of security. People with a similar lifestyle, such as B. Seniors, live in settlements that are specially geared to the needs of the residents. A well-known example are the senior residences in the Sun Belt of the southern United States. In these protected settlements there are specific facilities and recreational opportunities, such as golf courses and care facilities. In contrast, the second type of gated community is reserved for elitist and wealthy people. The boundaries of these settlements are meticulously protected by fences, trenches and barricades. Unwanted people are not even allowed to enter the buses. This enables the residents to live a carefree and active life through appropriate leisure facilities. The enclosed residential areas of the middle- and lower-income people are the third main type. For fear of crime, the z. Some of the already existing residential areas are secured by protective systems. This can reduce the cost of security.
The protected communities and suburbs are now facing the decaying quarters of the core cities. The North American city is divided into two parts, as it were, into residential areas of rich and poor population groups. This is why people speak of the dual city. There is a characteristic microcosm in the respective districts. Not only the gated communities have their own rules and laws, even in the poor neighborhood of the core cities the conventional rules no longer work. Even rehabilitation programs for the ghettos and slum areas rarely have the hoped-for success.

- Checkerboard pattern of the course of the road
- Skyscraper in the business center
- Classic structuring of the city in the CBD, transition zone and outside area
- Commercial strips along traffic axes
- General form of housing for the upper classes in suburbs
- increasing emergence of gated communities
- decaying core cities and ghettos

Back to the terrace
<?