Francophone bulwark on the American continent

The 500,000-inhabitant city on a rocky promontory on the St. Lawrence River is the only one in North America that has an intact fortress and an old town center. As the capital of New France, it is also a culinary bulwark on the fast-food continent. The cityscape looks more European than American: cobblestones, green roofs and narrow streets exude a European flair, which is underlined by the French language. The largest attraction is the citadel, with which the French and British defended the city against the nearby United States. It was built according to all the rules of European fortress art. In summer, the changing of the guard takes place here at 10 a.m., a remarkable spectacle of British character but in French.

Did not find what you were looking for?
Request an individual offer 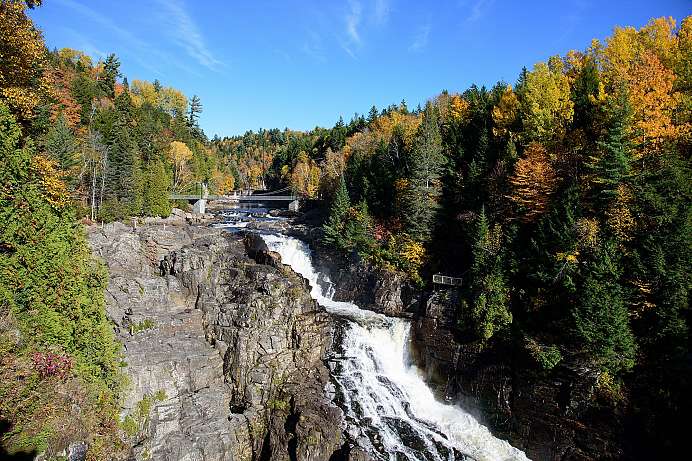 The spectacular gorge with vertical walls east of Beaupré was carved out by a glacier. The white water of the Sainte-Anne-du-Nord river thunders over a 74 meter high waterfall into the canyon. Three suspension bridges cross the gorge. Hiking trails lead to lookout points and picnic areas. A nice hike starts at the Lac-Sainte-Anne parking lot and leads down into the canyon. (there and back: 6.3 kilometers, 2 hours, up and down: 177 meters) 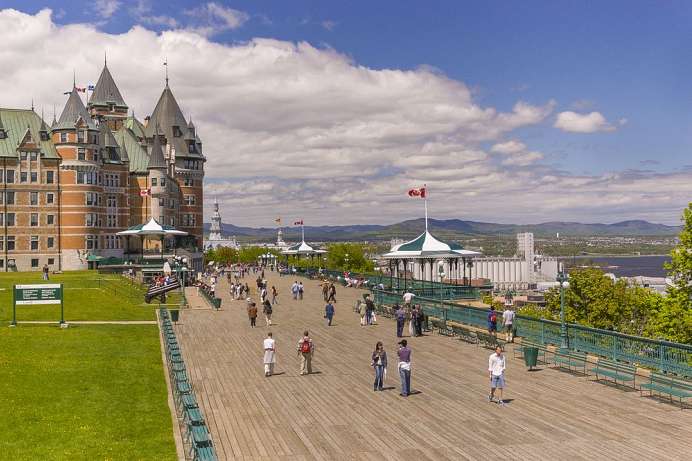 The landmark of Quebec is the castle hotel Frontenac, which was opened in 1884 together with the Canadian Pacific Railway. The monumental luxury hotel with over 600 rooms is well worth a visit. It not only shapes the cityscape of Québec, but has also been the focus of world history at least once. In 1943, in the middle of the high season and under the strictest secrecy in the hotel, the Allied landing in Normandy was planned. Among the nearly 900 participants in the secret conference were the American President Roosevelt and the British Prime Minister Churchill. In another conference in 1944 the Morgenthau Plan was discussed, according to which Germany would have become an agricultural country. 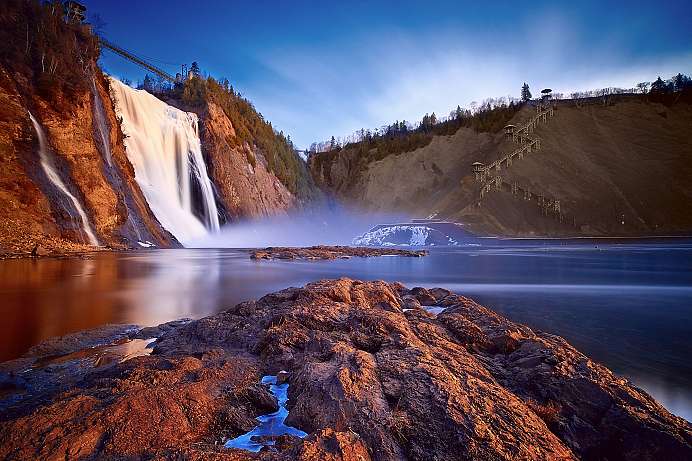 13 kilometers northeast of Québec, across from the southwest tip of the Île d’Orléans, the Montmorency River plunges over a rock face 83 meters deep into the Saint Lawrence River. The river basin at the foot of the waterfall is 17 meters deep. Today, the Montmorency Falls is one of Québec's most popular tourist attractions. A cable car takes visitors to the upper level of the waterfall. A staircase leads through the rock face. Directly above the waterfall, a suspension bridge connects the two banks of the river. When the cascades freeze in winter, you can watch the ice climbers. 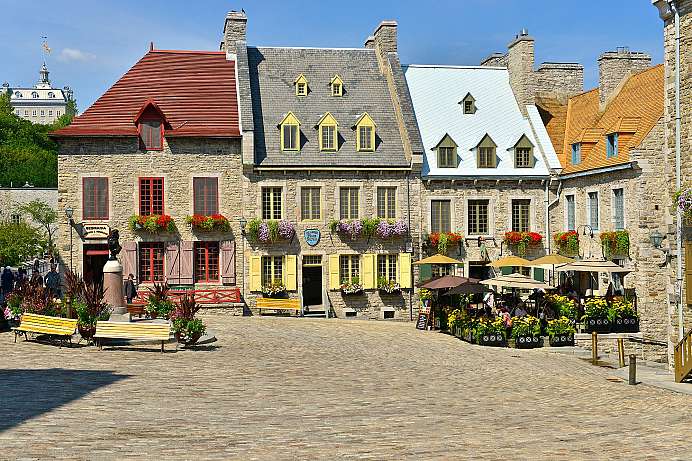 Cradle of the French America: Place-Royale in Québec

Cradle of the French America

In 1608, Samuel de Champlain, the colonizer and French explorer of Canada, had a trading post fortified on the Saint Lawrence River, where French fur traders traded with the indigenous people. The garden around the wooden fort soon became the marketplace that expanded into the Lower City of Québec. When in 1886 a statue of Ludwig IVX. was erected, it got its name: Place Royale. From here began the European history of discovery in North America. Today the square, which was restored in the 1960s, is lively with musicians and jugglers in the summer.

Are you curious about our tours?
Show all Canada tours
<?