Which is better Kuala Lumpur or Melaka

Two Bavarians on the move

Immediately after the border we went to the big bus station in "Johor Bahru" and there we got an impression of what to expect in Malaysia over the next few days:
a) We are now in a country where the state religion is Islam: Almost all women wear a headscarf and prayers can be heard from the loudspeakers in the bus hall and from the nearby mosque. New country, new customs, new culture.
b) We are immediately besieged by some people who want to lead us to various counters from where there are bus tickets to Melaka, and since everything is so confusing, you have no choice but to trust you and follow him. In the middle of the bazaar there is a small stand that sells tickets!
c) The prices are extremely cheap, not at all comparable with the prices in Germany or other countries. Our bus ticket to Melaka in a "Esspress-Bus", which goes through the 3 hours without any further stop, does not even cost us the equivalent of 4.00 euros, and we have seats like in the 1st class in an airplane: pure legroom, extremely wide and very convenient.
When we arrived in Melaka, we found a very nice and cheap hostel, and there we had to pay attention to the next: Before you enter a house, take off your shoes and leave them in front of the door and the toilets don't have toilet paper, but a water hose every second person pees over it. I have no idea how this is supposed to work ... From now on it is doubly important to have a handkerchief in your pocket!
Melaka used to be a Chinese trading city, which was then conquered and administered by the Dutch and has therefore been a very important port city, now it is rather insignificant because the sea is too shallow for overseas ships. But some churches and ruins still bear witness to the influence of the Dutch, such as a really beautiful and impressive church ruin on a hill in the middle of the city. As we lingered there a little, I noticed that some girls were sneaking around me and didn't dare to speak to me. After a while one took her heart and asked me if I would fill out a questionnaire about the ruin, since it was from a university and was investigating certain tourist attractions. In the questionnaire the question arose how best to "pimp" the ruin: paint it, add something, etc. I thought the question was a joke, but if it wasn't, as we should see later, is it really there the custom of trying to make old ruins more attractive by painting them. It's a shame about the buildings!

The next day we borrowed bicycles and just drove off without a rough goal. And the first few meters through the city were phenomenal: there are apparently no traffic rules and regulations there, you get the impression that the motto on the street is: the strongest wins! When you have come to terms with it, you suddenly get through the traffic much better: you avoid people on sidewalks, squeeze through cars, briefly cross a truck, take the other person's right of way, ignore traffic lights, etc. A real adventure on the road, and it's a lot of fun. In the end it even happened that we drove in a 3-lane one-way street in the opposite direction of travel, and not a single car driver honked ... That is simply part of it!
During our bike tour it suddenly started to rain heavily and a young construction worker asked us with a show of hands to follow him. He led us into an apartment where six other workers took refuge from the rain, but only one of whom could speak a little English. We sat in a room and the young workers stared at us in silence until one of them put a film about American wrestling into the DVD player. Now the television was more interesting than we were and the guy who spoke a little English explained something in their language to the six other workers, who were sitting in front of the television, amazed and with big eyes like small children. The whole situation was so beautiful to look at and reminded me very strongly of the book "Balzac and the Little Chinese Seamstress". After the shower subsided a bit, we continued through the non-touristy surroundings of the city.

Back in town we spent the evening in a small cafe with live music. There wasn't a permanently booked person playing there, but anyone who felt like it could go on stage and do their best. A very good concept, a total of six or seven musicians dared to go on stage and entertained the guests with some outstanding music. Seldom experienced such an interesting and relaxed atmosphere as there!
The place actually deserved to stay longer than just two nights, but we took a bus to the 2 million city "Kuala Lumpur", the capital of Malaysia.
And the first impression totally surprised me: I always had Kuala Lumpur in my head as an extremely progressive, clean and somewhat splendid city, but it is not at all (apart from the small area around the "Petronas Towers"): Everywhere Dirt, even more people sleeping on the floor than in any other city and chaos on the streets, unbelievable. We first had to get used to the fact that you have to walk carefully across the street, even when it is green, and that when it is red you can cross the street without any problems, even if the police are right next to you!
Via Chinatown, the "Colonial District" and the "Merdeka Square", we made our way past the "Menara Kuala Lumpur" (the 2nd tallest television tower in Asia and also the 5th tallest television tower in the world) then towards the landmark "Petronas Towers". The twin towers, which are connected by a bridge on the 41st floor, is the seventh tallest building in the world. We learned there that there are 1,200 tickets a day to get to the bridge, but that you have to queue up very early to get to the bridge. When we wanted to see where we had to line up the next day, we were waved over and we were allowed to take the last elevator up to the bridge for free and see "Kuala Lumpur" from above. I was very lucky! But the towers are even more fascinating at night when they are illuminated and illuminated. Back in the hostel in the evening, we had the feeling that we had already seen everything from the city.

So we went to some sights outside of the city. First we went west to "Shah Alam", there is one of the largest mosques in Asia, which can accommodate 24,000 people. The sight is just fascinating, and you are even allowed to enter and tour the mosque. The one-hour bus trip was definitely worth it, we can only recommend everyone to take a trip there from Kuala Lumpur. Then we went to "Putrajaya", a newly planned city 25km south of Kuala Lumpur, which will later serve as the government district. A total of 330,000 people should be able to live in this city, at the moment "only" about 50,000 people live there, so it was a little very quiet and a bit deserted in this city, but of course very interesting in our eyes.
We held a well-known highlight at Kuala Lumpur until the end
to the "Batu Caves" in the north of the city.
When we arrived there, we were immediately a bit shocked, everything was laid out in a touristic way, there wasn't much to be seen of a quiet and spiritual complex. Right next to the huge, golden statue and the pompous staircase that leads up to the main cave, souvenir shops and stalls romped about, as well as a lot of rubbish. But that was not enough: Each of the 272 steps is numbered in large letters, and when you reach the top, the next souvenir shops, partly inside the cave and covering up some statues. And in between garbage, stray cats, garbage, monkeys, garbage, chickens, and garbage. At the end of the large cave there is a kind of grotto in which the light shines in from above and there is a Hindu temple. But it is not the temple that catches your eye, but the mountains of rubbish and the monkeys that frolic in the midst of the plastic bags and leftover packaging. The temple and the cave with the monkeys that live there have so much charm and are something unique, but are totally "disfigured" by these mountains of rubbish and the souvenir stands. Really, really a shame! You almost have to buy the postcards there to see what is actually behind the stands!
For some temples, which are at the foot of the stairs between the sales stands, we lost our appetite and drove back to the city a little earlier to get the afternoon bus in the direction of the "Taman Negara National Park". After three cities in Asia, we are now very curious about nature and the people there. 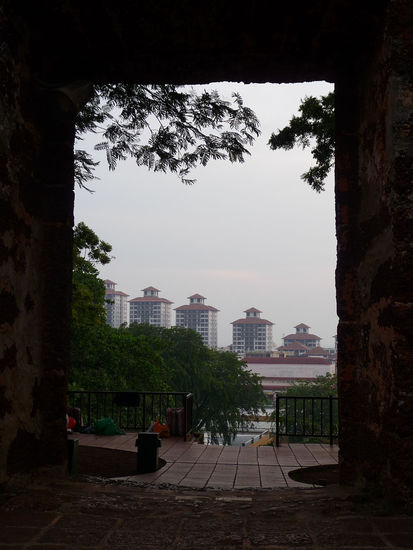 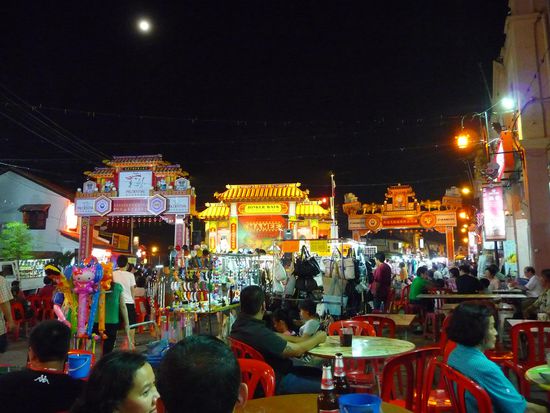 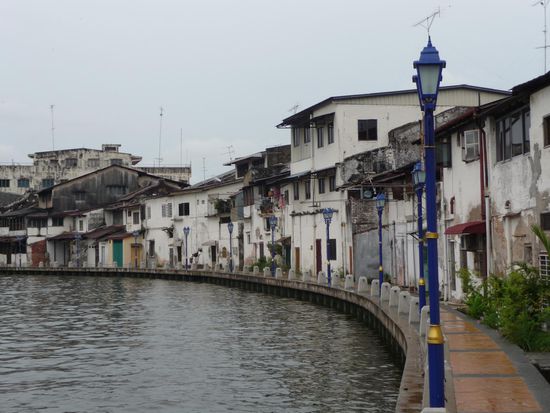 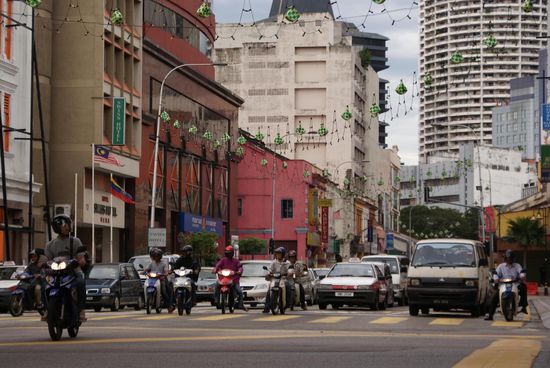 In the Petronas Towers 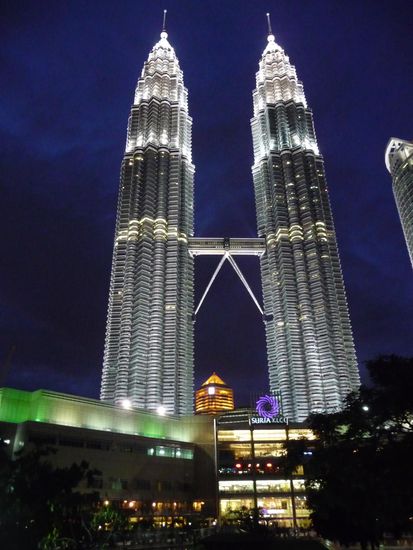 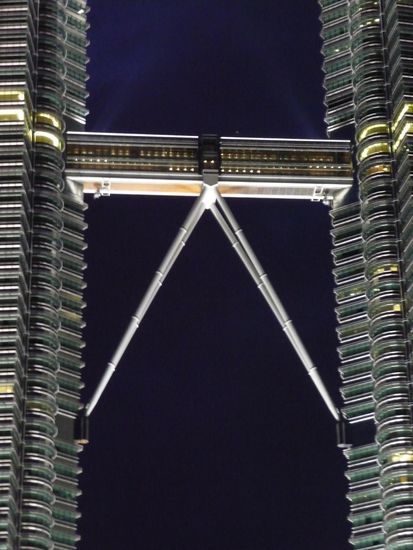 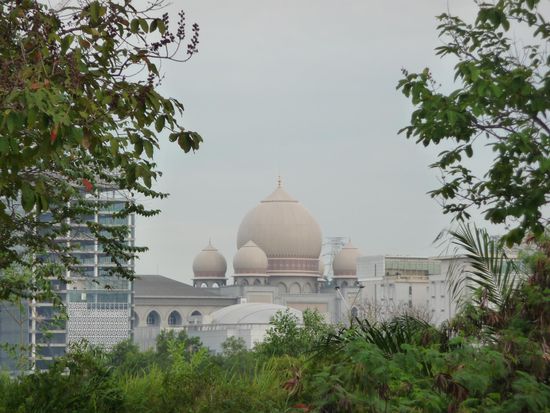 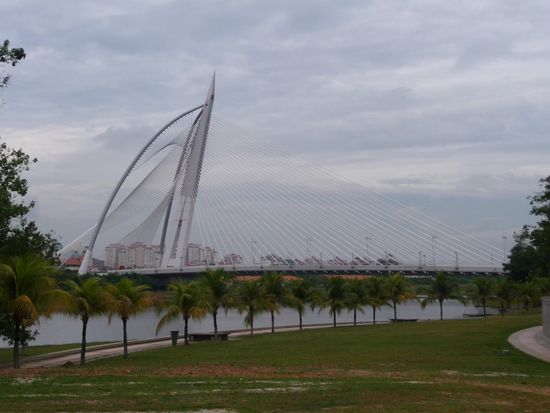 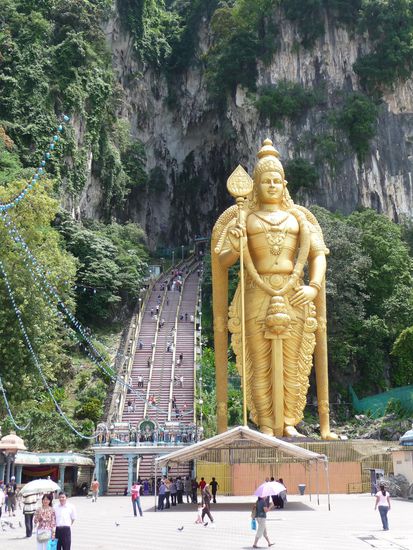 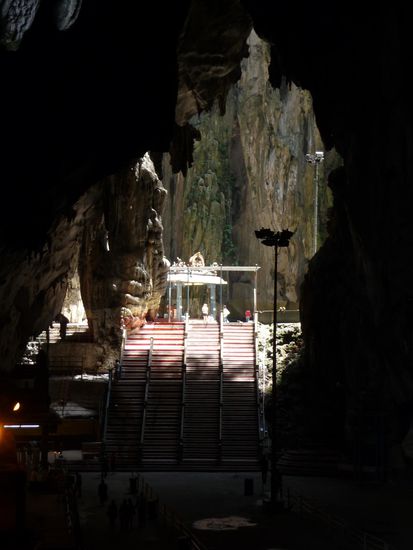 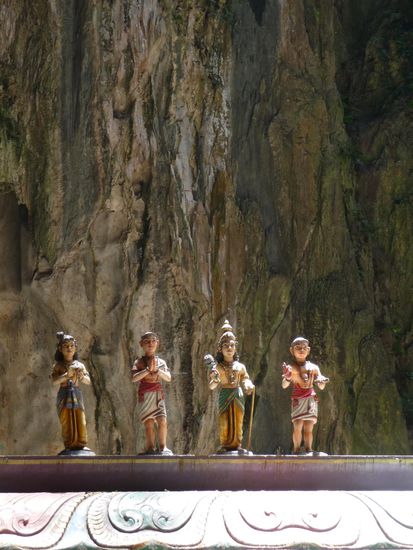 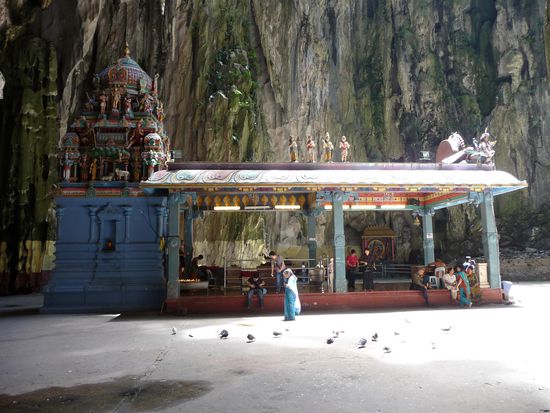 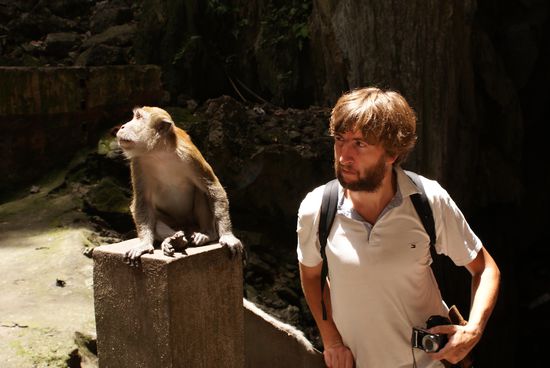