Vodka with lemon soda or rum with cola - sweet mixed alcohol drinks are very much in vogue with young people. Experts fear that the Alcopops develop into a new gateway drug for alcohol addiction. 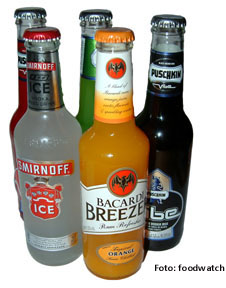 They look like harmless lemonades, but contain over five percent alcohol: Ready-made cocktails based on rum, vodka and other spirits are increasingly conquering the market. The industry speaks of alcopops, party drinks or RTDs - ready to drinks. The number of bottles sold in Germany increased more than fivefold in 2002 compared to the previous year. With Smirnoff Ice, Bacardi Rigo or Puschkin Vibe, the spirits manufacturers are trying to boost their constantly falling sales figures. Because since the 1980s, Germans have been reaching for hard liquor less and less. Grandpa's Korn and Grandma's eggnog no longer turn on today's disco generation. It is true that health experts and physicians are pleased; the beverage industry does not like this trend at all. With a huge advertising effort, sweet mixes and cool names, she tries to get the business with the high-proofs going again. The alcohol is filled into handy bottles of 275 to 350 milliliters and mixed with water, sugar, carbonic acid, coloring agents and flavors.

In a bottle of Alcopop there is roughly a double schnapps. The proportion of rum, vodka or sugar cane schnapps is usually 12-15 percent, the finished drink thus has 5 to 5.6 percent alcohol by volume. This amount roughly corresponds to that of strong beer. In order to give the whole lemonade character, the schnapps is mixed with sugar, carbonic acid, flavorings and colorings. With over 13 percent sugar, some drinks are even sweeter than conventional lemonades. A few contain fruit juice, the proportion of which is then between 5 and 15 percent. Controversial preservatives such as benzoic acid and sodium benzoate make the drinks more durable. Azo dyes, which despite approval, are suspected of triggering allergies and hyperactivity (attention deficit syndrome), are responsible for the upbeat colors. Stabilizers such as malic or citric acid complete the artificial mixture. The result is a colorful and sweet mix of additives, behind which the alcohol is cleverly hidden. However, consumers usually look in vain for a list of ingredients on the label. The manufacturers only have to indicate the alcohol content.

Getting into the addiction?

The alcopops taste sweet and sparkling. This is exactly what young people like. Commercials in the style of music videos and the websites of the providers obviously appeal to teenagers, even if this is denied by the corporations. So it is not surprising that fifth graders at the age of 10-11 already eat the sweet alcoholic drinks. Mixed drinks are right at the top of the popularity list among 11-year-olds and have pushed beer, wine and other spirits back. About a third of 15-year-old boys and a quarter of girls regularly drink alcoholic beverages. Four years ago the values ​​were significantly lower. This was the result of the first German youth health survey, which has just been published by scientists at Bielefeld University. In Great Britain, where the alcopops have been on the market for some time, the numbers are significantly higher. The fears of the experts have come true: The sweet drinks lower the access threshold to alcohol. The drug commissioner of the federal government, Marion Caspers-Merk, therefore warns against mixed drinks on the basis of hard liquor: The entry into addiction is inevitable.

Due to the sweetness and the intense aromatic substances, the bitter alcohol taste is barely noticeable. Some alcopops can therefore be tipped down like soda or cola. Five to six bottles can easily come together during a party. That corresponds to an alcohol content of 10-12 schnapps. Due to the high sugar and carbonic acid content, the alcohol passes into the blood particularly easily and makes young consumers drunk in a very short time. The German drug and addiction report 2003 states that one in three 14 to 15-year-olds has ever been intoxicated. Addiction experts see this as a great risk for later alcohol addiction. According to the WHO, alcohol and its consequences are the leading cause of death among young men between 15 and 29 years of age across Europe. The indirect consequences include, above all, traffic accidents and acts of violence.

According to the law, drinks based on spirits are not allowed to be given to young people under the age of 18. But the control is sketchy. In practice, minors can easily access alcopops at any time. The market leaders Bacardi and Diageo have reacted to the criticism: They now want to label their drinks with age notices "from 18 years of age". Something that is forbidden, however, increases the incentive for young people even more. According to studies by US researchers, warnings such as "Don't Drink & Drive" induce even more alcohol consumption.

Alcopops: Taxes could slow down consumption

In order to curb the widespread use of party drinks among young people, Switzerland is now introducing a special tax on mixed drinks containing alcohol. Instead of half a franc as before, consumers have to pay 1.80 to 2 francs per bottle in taxes. In France, a similar tax in 1996 made products so expensive that the market collapsed. In Germany too, addiction experts and some politicians now see an urgent need for action. A special tax is not yet in sight. The party drinks in this country are relatively inexpensive at 0.89 to 1.79 euros per bottle. The German headquarters for addiction issues is also calling for an advertising ban similar to that for cigarettes. When adolescents drink alcohol excessively, social milieu or peer pressure also play a role. That is why prevention measures are also necessary. Parents, teachers, and the intermediary should help educate people about the risk of sweet drinks. Without political intervention, however, it will be difficult to get a grip on the alcohol problem among young people. Source: Dittrich, K .: UGB-Forum 6/03, pp. 308-309

More information can be found here:
Effective promotion of children and young people

All articles about alcopops ...