The body scanners that are used at German airports do not scan the entire body of passengers. The devices do not capture the feet. However, there is often not enough time to check the shoes individually. 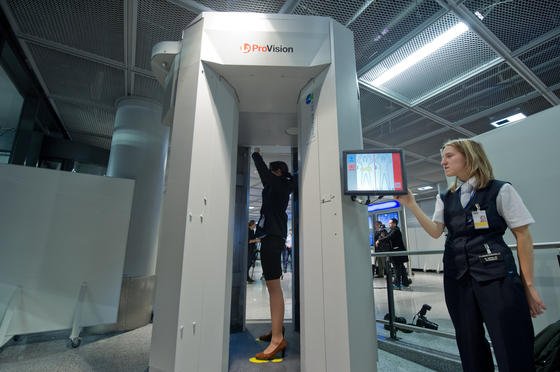 Body scanners from the Federal Police at Frankfurt Airport: the scanners do not record the feet. The shoes must therefore continue to be checked individually - but this does not always happen due to time constraints.

Even at British and American airports, which are already using security gates that were previously reviled as naked scanners, air travelers also have to have their shoes checked. Because the devices of the L-3 Communications subsidiary Security & Detection Systems from Woburn in the US state of Massachusetts find - almost - everything threatening that people hide on their bodies.

Only the shoes that escape the terahertz waves of the scanner with the designation L-3 ProVision ATD. The "Spiegel" now draws attention to this. "Everything below the ankle is not recorded by the devices," criticizes Wolfgang Pehl from the police union at Düsseldorf Airport.

Actually, this is not a new finding. All body scanners overlook this area. Therefore, a special inspection of shoes and stockings is actually inevitable. In Germany, for example, the Federal Police saves it because of a lack of time. The new scanner also does not detect objects that are hidden in body orifices. Even in the folds of obese people or under sweat stains, weapons can be hidden.

75 of these scanners, each costing 165,000 euros, are now in operation at German airports. In contrast to devices that used to work with weak X-rays, it is now terahertz waves. These have a frequency of 0.3 to 3 terahertz - 1 terahertz corresponds to one trillion hertz. This technology has two advantages: the rays are not harmful to health and they not only make metallic objects visible, but also objects made of other materials, such as ceramics, explosives or porcelain.

Actually, they can no longer be called a naked scanner. The waves penetrate the clothing effortlessly and are then reflected by the body and the objects hidden on it, so that an exact image of the body surface is created. However, this is no longer visible. The scanner converts it into a synthetic-looking human model that does not allow any conclusions to be drawn about the real shape of what is scanned.

Image recognition software evaluates the images and sounds the alarm if it detects something suspicious. Then an expert examines the picture. However, this procedure is not yet fully developed. There were many false positives, especially shortly after the introduction. Harmless citizens are suspected of carrying weapons and people with dangerous objects are considered harmless by the software.