Wish, Joom and AliExpress - that's what the cheap marketplaces are all about

"Minus 91 percent", "minus 97 percent" and many branded products even at the declared price of just one euro - anyone who comes to the Wish or Joom website or app must feel like they are in a bargain paradise. In addition to the supposed low price, other incentives tempt online shoppers to consume quickly. Statements like "+100 bought this" or fade-ins like "Almost gone!" should show: the products are in great demand and will soon be sold out - so get your hands on it before it's too late!

Wish and Co. are already so popular in Germany

Cheap marketplaces such as Wish or AliExpress are becoming more and more popular with online shoppers, shows the Consumer Barometer from January 2019 by the management consultancy KPMG and the Cologne Institute for Retail Research. 500 online users were interviewed for the representative study. 58 percent of the interviewees have already used large online marketplaces such as Amazon or Ebay. But the upstart Wish has already found fans: 15 percent have already ordered something there, 33 percent know the challenger at least by name. “Although the established online marketplaces are still clearly preferred in Germany, the new providers with their focus on bargain offers are also attracting significant interest in this country. The discount store approach also works with online platforms, ”says Mark Sievers, Head of Consumer Markets at KPMG.

For users, trust is more important than price

But price is - at least for those surveyed in this study - not yet the most important factor when shopping on the web. Instead, three quarters of the study participants attach particular importance to trust and reliability, 71 percent pay attention to “good quality” - a “low price” only comes in third place. Established providers and new platforms are, however, very far apart in the areas of trustworthiness and quality. "The decisive factor for the further development of newer online marketplaces will be how well concerns, in particular with regard to trustworthiness and quality standards, can be dispelled by consumers," predicts Sievers.

The fact that there is still a lack of quality and security at the new cheap marketplaces can also be read in many online forums that talk about “junk goods from China”, “scrap yards” or “fake products”. In review portals such as Trustpilot there are sometimes devastating reviews: For example, around half of the 12,000 reviews in the worst category on Wish are “unsatisfactory”.

The Leipzig trade journalist Florian Treiß researched product piracy on the Wish platform and ordered a fake Lego Batman mobile as a test. The model was no longer available from the original manufacturer Lego - but it was from Wish. The order was there within two weeks, the toy including instructions in the best condition. "The delivery was not checked by customs and I doubt that the product was properly licensed," says Treiß.

There are plenty of other fake Lego models to be found on the platform: The "James Bond Aston Martin", which costs 150 euros in the Lego shop, is available from Wish as a replica for 32 euros. Treiß has also found counterfeits of other products and brands. “Even if Lego has long been aware of the problem, the company is apparently powerless against fakes on Wish. However, I also wonder why customs waved shipments from China through. 'Batman' was noted on the customs slip of my order. Such a brand name could make attentive customs officers prick up their ears. " 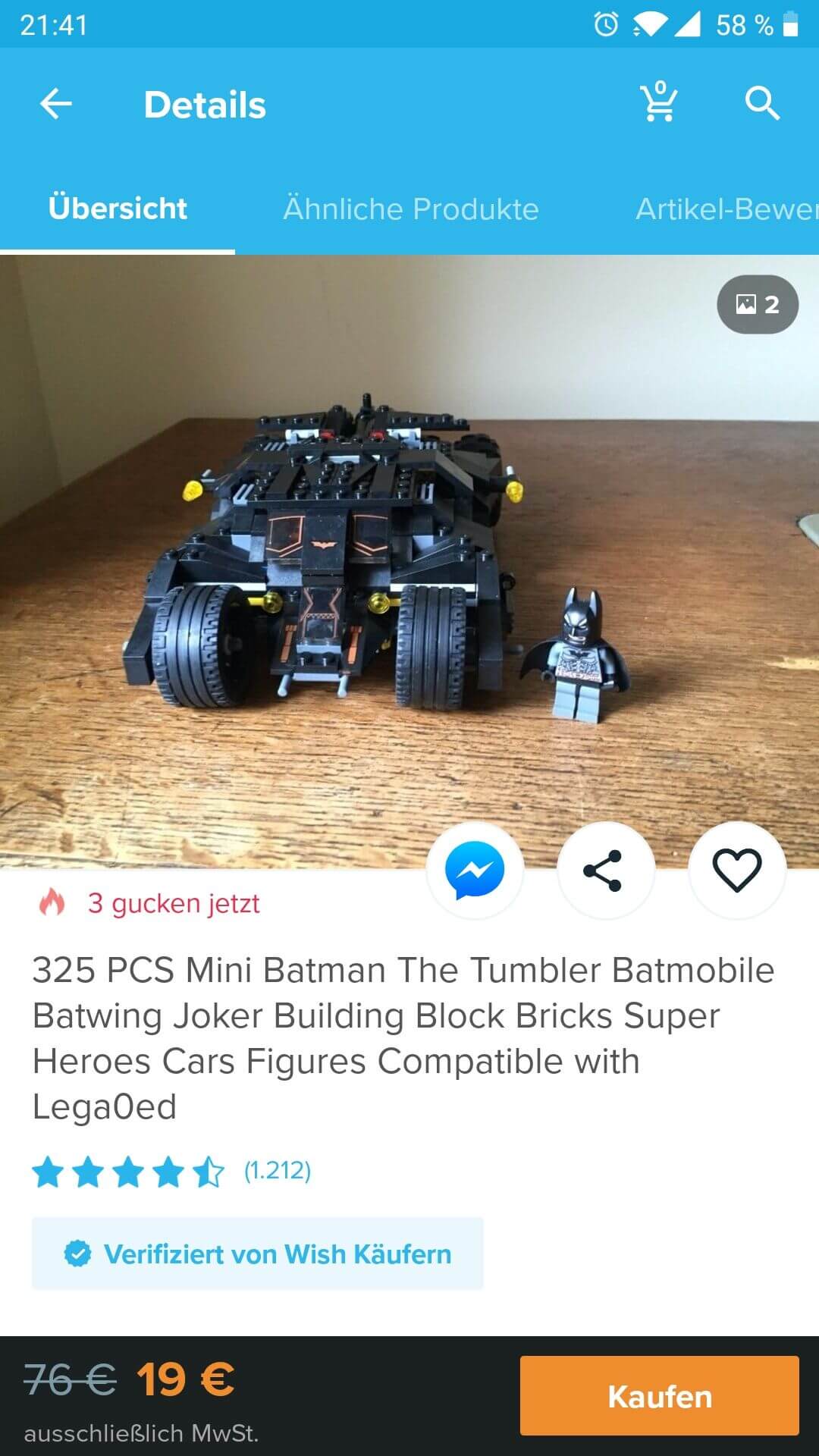 Counterfeit products are not the only problem in the cheap marketplace. Consumer advocates repeatedly warn against Wish: Many customers complain about goods that have not been received, poor quality, long waiting times or problems with payment processing, as reported by the consumer advice centers. The Marktwächter project of the Federation of German Consumer Organizations has scrutinized low-cost providers such as Wish several times. In 2017, the employees examined the offers from nine online shops in Asia and bought clothes there on a test basis. Result: Almost every item of clothing ordered was smaller than specified and had other defects in workmanship or cut. For some parts, the specified material was even wrong: polyester instead of cotton.

The reverse transaction also caused problems again and again. The main problem here is the high return costs that can be incurred when returning to China - these are often borne by the customer. “Anyone who gets involved in the cheap offers of such dealers should be aware of these risks. Due to the high return costs, supposed bargains can quickly cancel themselves out, not to mention the possible effort of getting a return address in the first place, ”warns Dr. Kirsti Dautzenberg, team leader at Marktwächter Digitale Welt.

Brazen method: Wish blocks customer accounts in the event of too many returns

In August 2018, Wish was even noticed by a particularly brazen method for refunds: If a buyer returned too many products that had been ordered, the company blocked their user account - this meant that open orders could not be canceled or complaints. Wish customers report that their account was blocked after just one return. “With every order, customers run the risk that Wish prevents them from exercising their purchasing rights,” Dautzenberg points out. And Wish topped the entire service debacle with another outrageous measure: The marketplace asked the blocked customers to continue shopping anyway - in order to restore the "good reputation" of their account.

What does Wish say about the review?

What does the company say about the allegations? We checked with Wish. Wish refers to a "Comprehensive Refund Policy" for customers. Users can also report suspected violations of the established code of conduct for retailers at any time, the products may then be removed, the retailer has to pay a fine or, in extreme cases, is excluded from the platform. The dealers are extensively checked in advance before they can start using Wish.

How does Joom perform in tests?

Other cheap marketplaces such as Joom, based in Latvia, are also repeatedly criticized. The radio station You FM has taken a close look at Joom and other bargain providers. Noticeable with Joom: The individual dealer ratings are not broken down in detail, so the Joom dealers appear “significantly less trustworthy” compared to others. Conclusion of this test: Stay away from orders at Wish, Joom and Co.

Giga also warns against Joom in his test. The purchase there corresponds to tossing a coin: “Either you are unlucky or it works for once,” is the conclusion. Users even report fraudulent attempts by merchants on Joom. For example, weights and USB sticks with hot glue guns were attached to hard drive cases.

The specialist magazine Chip has also tested Joom, and most customer experiences are positive. The biggest points of criticism are the shipping, which can take up to 30 days, and possible problems with customs. Because if an order, including shipping costs, costs more than 22 euros, the customer must also declare their package and collect it personally at customs.

That's what Joom says about the review

"We will refund the money if the product delivered does not match the description in terms of appearance or quality - nothing simpler than that," explains Mika Stetsovski from Joom when asked by OnlinehaendlerNews. He explains that Joom has very strict requirements for its merchants and evaluates their performance on other online platforms to ensure that they are acting responsibly.

How does AliExpress perform in tests?

There are also many critical voices and tests about the Alibaba marketplace AliExpress. For example, the Swiss Toy Association (SVS) ordered toys from AliExpress and Wish on a test basis in 2019. The research laboratory found critical values ​​in four of the six toys from AliExpress. The articles contained, among other things, dangerous substances such as cyclohexanone, toluene, DEHP and lead and some exceeded the permitted values. For example, DEHP can affect children's endocrine systems. Almost all of the products did not have the required labeling, some were counterfeit. Several products should not have been sold in Switzerland.

The Techbook portal has also taken a closer look at AliExpress and warns of counterfeiting, especially in the electronics sector, such as memory cards. “AliExpress is a good alternative to popular platforms like Ebay and Amazon. Due to the delivery times, the poorly translated German homepage and the lack of PayPal, however, you cannot count on the same shopping convenience as with other trading platforms ”, is the conclusion.

With AliExpress, there is a particular risk in the different shipping costs, which are often barely transparent: Some China dealers from China do not charge any, others up to 50 euros - if you as a buyer notices this too late or not at all, you will experience one at the latest when you debit the account bad surprise, according to the You-FM test.

Can German online retailers sell on the cheap marketplaces?

“Particularly problematic is the fact that the low-cost marketplaces are often not designed to insert legal texts as required by European and, in particular, German law. In the case of Wish, for example, there is basically no information as to whether the total price includes VAT. According to the Price Indication Ordinance, however, this is absolutely necessary, ”explains Sandra May, fully qualified lawyer and legal expert at the Online HändlerNews editorial team. The articles also lack the duration of dispatch or the possibility of integrating a prescribed imprint. "Overall, from a legal point of view, we can only advise against trading on these marketplaces," she advises.

Opportunities for online merchants at Wish and Joom

Nevertheless, there are online retailers who are active there. Shop system provider JTL, who also offers an interface to Wish, has so far seen "reluctant interest" from its customers. “This could be related to the fact that the active dealers on Wish so far only come from Europe to a very small extent. So there is simply a lack of experience, ”explains JTL managing director Thomas Lisson. However, he also sees opportunities. “Anyone who starts using Wish as an online retailer can of course benefit from the low level of competition and easily stand out from Asian providers. Since there are particularly young, price-conscious and trend-conscious buyers on Wish, retailers should carefully consider which items in their range they are offering there. "

The price war with suppliers from the Far East, for example in terms of electronics or gadgets, makes little sense. Instead, dealers need to find their niche. “We have a dealer who sells products with German-language texts or sayings. There is little competition from Asia and he is extremely successful on Wish, ”reports David Pohlmann from Billbee.

Adrian Gmelch from Lengow - who also connects retailers to Wish and Joom - also knows advantages for German companies. For example, Joom recently introduced the label “Products from Europe”. “This label indicates that the products are sent from Europe and are therefore delivered much faster than the competing products from Asia! A plus point for all of our European dealers that we have connected. "

The consumer center has put together a few tips for those who, as an online shopper, still want to shop at Wish, Joom and Co.