Bitcoin fraud - this is how the rip-off works!

The deposit is small, the promise is great: fully automated trading that leads to a fortune in a very short time. Bitcoin, the largest of all crypto currencies, is particularly often misused for fraud. We have registered with over 40 suspicious platforms (e.g. "Bitcoin Code") from German-speaking countries to find out what is behind it. Here are the results of our research.

The following trading platforms are active in Germany, Austria and Switzerland and are dubious scams. We advise against registering with one of these supposed brokers. If you have registered with one of these providers, do NOT deposit any money!

If you have registered with one of these providers, do NOT deposit any money!

You should pay particular attention to these signs of fraud:

"Get rich quick" programs and apps are advertised. The stakes are small, the profits are large. At least that's how it reads.

The truth is, it is a bitcoin scam. And we're not talking about the cryptocurrency itself. This is of course legitimate.

In addition to reputable trading platforms, there are also a lot of black sheep in the scene. The most popular products are Bitcoin robots and auto trading systems, which promise to be able to trade crypto pairs independently. You can put your feet up and wait. The reality is of course different: there are no profits and the money is gone.

As it turned out in the course of our research, there is primarily one network that currently dominates Bitcoin fraud.

However, this is not yet comparable to the figures from December 27, 2017, when the cases reached a peak.

Bitcoin fraud: Two strategies are predominant in the DACH region

Since we signed up with over 40 of these Bitcoin platforms, we noticed that there are basically two strategies.

If you look at the first strategy, the case is clear: classic fraud is being carried out with Bitcoin.

Probably the best known name in the Bitcoin fraud environment is a website called "Bitcoin Code". This is a platform that appeared a few years ago and also achieved dubious fame in this country. However, the actual monetary success is at least doubtful, at least for some of the platforms we examined.

The reason for this is the simple impossibility of making a deposit. Even if we wanted to! There is a prominent "Deposit" button that allows us to pay by credit card. However, no matter how many times we click on it, nothing happens!

"This is a software whose origin we could not determine exactly. However, since it is used by various providers (Dubai Lifestyle App, Ethereum Code, ...), it can be assumed that it is a white label Solution from the depths of the dark web.

Strategy 2: Bridge side to Bitcoin brokers with dubious seriousness

The second strategy works on a different principle.

Here the potential victim ends up on the same landing page as in strategy 1, but leaves it after entering the data (name, email address and telephone number) and is instead forwarded to a CFD & currency broker.

In this case, the bridge side only has the task of making the visitors "keen" on Bitcoin trading.

If you land on the target page, the thing is immediately apparent to the trained eye: In the end, it is also manipulated software, with the difference that everything is a tad more professional and is hardly recognizable as fraud for the layman.

One could argue that the target providers have nothing to do with the promises made on the upstream external side. Rather, it could simply be an affiliate strategy to generate leads.

At first glance, this may well be the case, but there must also be a connection to the broker, as our data has been transferred and an account has been set up.

People have become cautious these days. If in doubt, Google is often consulted and looking for relevant experience reports.

Bitcoin fraudsters know that too. That is why partnerships with news sites from the crypto sector have been made, which extol the respective scam and advertise absurd profit promises such as "87% promised profit rate":

The respective experience reports are structured in such a way that they first address a possible fraud and also address the marketing methods ("Cave of Lions", fake newspaper articles, etc.), but represent this as a pure advertising strategy.

In conclusion, it is usually recommended to use the respective platform. Allegedly no signs of fraud could be found. On the contrary, they are even enthusiastic about the possibilities of the Bitcoin platform.

It is impossible to make a loss in demo mode. This is what it looks like in the backend of "Bitcoin Code": 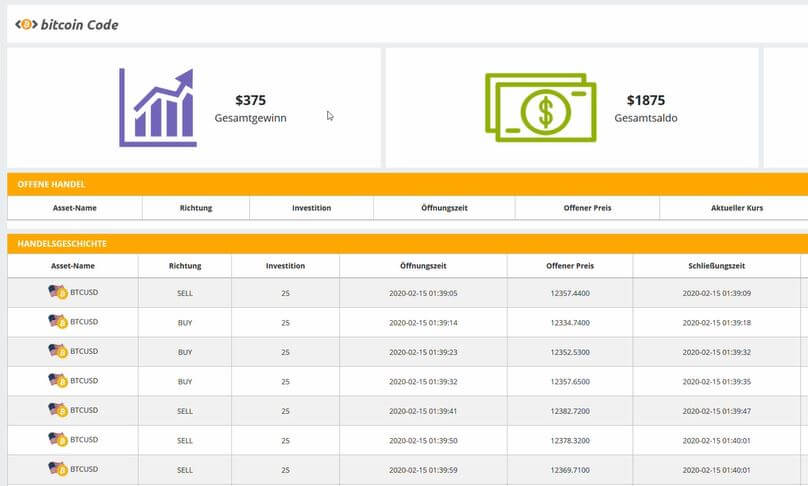 A similar picture emerges with "Centobot". As soon as you click on "Start", the controls move wildly back and forth, which almost looks like a caricature.

After about 40 seconds the result: $ 1,375 profit made! Strangely, the Bitcoin robot always gets the same profit with every run. A real professional on the market, this trading robot!

However, our conversation with support is almost even better.

An employee named "Richard" answers and asks us if we need help.

Here is the (translated) chat history:

Bitcoin scam on behalf of the Lions Den

The VOX show "Den of the Lions" has made a name for itself in connection with Bitcoin. However, not voluntarily, but through targeted placement of advertisements from a Bitcoin fraud network.

This is how it works in detail:

The whole thing is quite nippy. One is led to believe that a cave of the Löwen show is not allowed to be broadcast because a secret system has been revealed in it, which has already made many people rich.

To make the article a little more believable, it is pointed out that you can also lose money:

"Of course not every trade is successful. It is not a magic platform. However, 92% of my trades were positive. After three days I had already made a profit of € 7,300.00"

Quote of the fake article

Anyone who is familiar with investments and finances knows that a 92% success rate is an absolutely unrealistic value. Of course, the Bitcoin fraudsters also know this, but hope that laypeople will fall for it

BILD, ZDF, Spiegel & Co. have nothing to do with Bitcoin fraud

Daily newspapers and other large media enjoy great trust in the population. Bitcoin fraudsters take advantage of this by copying names, logos and layout almost 1: 1 to create the impression that it is a serious article by a journalist. A perfect example of "fake news".

It is interesting that the articles that are intended to induce the use of the Bitcoin software are mostly written in good German and without noticeable spelling errors. This does not yet indicate that someone from the German-speaking area must be involved, but at least the services of a native speaker have been used.

Unauthorized use of celebrity names like Frank Thelen & Co. should create trust

One thing has to be left to the fraudsters: they know exactly what is going on. The following celebrities appear more often in connection with Bitcoin:

None of these celebrities are involved in these scams.

The advertisements are often not about Bitcoin or any other cryptocurrency at first.

For example, it is suggested that Dieter Bohlen has died. The "news" article itself does not deal with this topic at all.

The point is that as many people as possible, out of shock or curiosity, click on the ad, which is then supposed to generate as many "customers" as possible for the manipulated trading software.

In the welcome video on the homepage, celebrities express themselves positively about Bitcoin. These sequences come from interviews, which are cut together and presented in a very shortened form.

Usually it is advertised that an amount of only € 250 is enough to start trading Bitcoin. The sum is of course wisely chosen: low enough to take the risk. High enough not to make it seem entirely unrealistic.

There is a large network behind Bitcoin Code & Co.

We took a closer look at some of the platforms. It is noticeable. All platforms use thissame layout and even the same texts.

Both are only slightly adjusted, so that at least only at first glance it looks like different trading platforms or Bitcoin CFD brokers.

The websites themselves use various obfuscation techniques, which make tracking much more difficult.

You know these testimonials from where ...

A video is usually played on the website, which is intended to provide an insight into trading, but also reports on the allegedly positive experiences of investors.

If you deal a little with online scams, you will notice that some of the people presented are either very busy in the financial world, or, and that is the more plausible explanation: it is not a shame to hold up their faces for various scams.

We continued our research. The lady from the video is actually an actress who can be hired for a few euros for "Fiverr":

What can I do if I am caught up in a bitcoin scam?

If you have come across a fraudulent Bitcoin broker and in the worst case even lost money, we recommend the following procedure:

Always be one step ahead on the financial market ...

100% free & exclusive newsletter for the FINANZSACHE community.
Get tips that are really noticeable in your wallet and that you have never seen before!

Contents of the newsletter: Exclusive tips & helpful information on investments, stock exchanges & Co. (finances). Including news from FINANZSACHE and competitions only for newsletter subscribers. The dispatch takes place via the service provider Mailchimp. By subscribing to the newsletter, you agree to the relevant data protection provisions.

At this point, you can report websites that are clearly fraudulent in the field of cryptocurrencies such as Bitcoin. These will then be added to our list. You can also discuss the topic with other users.

Please note that we will not forward your report to law enforcement authorities. However, your report helps to warn other users about fraud.

NEW! Many have wanted an additional opportunity to exchange ideas with other 👱‍♀️👱‍♂️ users in a 💬 group chat. This is now possible in two easy steps!