What is the measles vaccine

The measles start with a simple runny nose, followed by a cough and inflammation of the eyes. After a few days, the fever rises and red spots appear on the face and gradually extend all over the body. Even without complications, measles is often a major burden: the child usually does not have the strength to get out of bed for at least a week. 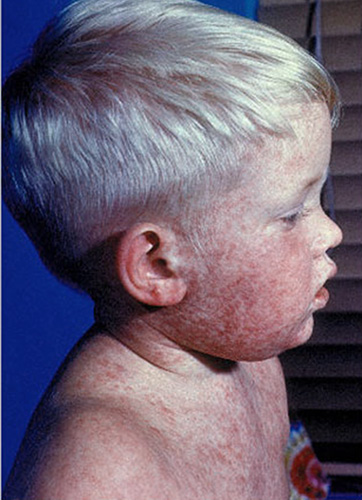 Measles starts with a simple runny nose, followed by a cough and inflammation of the eyes. After a few days, the fever rises and red spots appear on the face and gradually extend all over the body. Even without complications, measles is often a major burden: the child usually does not have the strength to get out of bed for at least a week.

Measles also cause a type of immune system amnesia that destroys memory cells and makes patients vulnerable to illnesses they already had.

Complications are common with measles (and affect about one in six people). The most serious complications are pneumonia and encephalitis, which can cause severe damage to the nervous system (see video).
Measles has not gone away in Europe.

From the beginning of January to May 6, 2019, 166 cases of measles were recorded in Switzerland, almost eight times more than in the same period of the previous year (21 cases). The incidence increased from 2.5 (2018) to 19.5 (2019) cases per million population (non-annualized incidence). Of the 166 people reported so far, 14% were individual cases that occurred across ten cantons. The majority of the cases (59%) belonged to an outbreak, whereby one is defined as "at least two epidemiologically related cases".

It is estimated that without vaccination there would be 40 to 70 encephalitis and 15 to 40 deaths each year in Switzerland.

Since the vaccination rate is not yet sufficient (89%, data from 2018, 2 doses at the age of two), there is currently still a considerable risk that an unvaccinated child or adult in Switzerland will develop measles. Epidemics also occur again and again.

The measles vaccine contains weakened viruses. It is supposed to trigger the immune response without the disease breaking out. It does not contain aluminum.

Vaccination against measles can be done individually or in combination with mumps and rubella (MMR). Two doses of vaccine are required.

The vaccination is recommended for children aged 9 and 12 months (with increased risk from the 6th month).

It is also recommended for non-vaccinated adolescents and adults born after 1963.

It is never too late to get one or more vaccinations. In the last few weeks, the myvaccinations foundation has made enormous efforts to remedy the critical weaknesses identified previously. A new overall assessment has shown that safe operation of the platform is no longer possible. The foundation is working on a solution to make their vaccination data accessible again to users and asks for patience.

Degree of protection of vaccination against measles

After two doses of vaccine, the measles vaccination is more than 97% effective. Most people who are fully vaccinated are protected for life.

People who do not respond to the vaccination are at risk of contracting measles at any age. However, they could be protected by herd immunity if the children in Switzerland were vaccinated in the same way as the little Finns or the children in Tajikistan.

Known side effects of the measles vaccine

The MMR vaccination was developed to be as effective and tolerable as possible. After vaccination, there is seldom a local reaction to the sting.

About one in ten children will have a fever. Sometimes (2 to 4 out of 100 cases) red patches of skin or swelling of the salivary glands will appear. If these reactions occur, it is usually seven to ten days after the vaccination.

A very high fever can cause a febrile seizure (in 1 in 3,000 children). This is why it is important to control the fever.

In one in 30,000 children, the MMR vaccination results in a temporary lowering of blood platelets, which in turn is associated with an increased risk of bleeding (usually skin bleeding), a complication that occurs much less frequently than after measles and rubella.

Serious side effects are extremely rare (less than 1 per million). Other problems after these vaccinations have been reported, but so rare (less than 1 in 100,000 to 1 million) that it is very difficult to find out whether the vaccination is the cause or not. The MMR vaccination does not overload the immune system, nor does it increase the risk of other diseases (allergies, autism, inflammatory or autoimmune diseases).

PDF - Can the measles, mumps and rubella vaccination trigger autism? (2002)

PDF - Adaptation of the recommendations for the prevention of measles, mumps and rubella (MMR) (2019)