The most important infections in dogs in brief 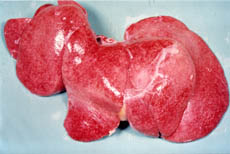 Infectious liver inflammation is also caused by a virus. Their course is usually more severe in young dogs than in older animals. Puppies can sometimes die suddenly without first showing symptoms. At a slower rate, the disease resembles distemper. In addition, the dogs often show significant pain in the abdomen and bleeding from the mucous membranes. The long-term damage includes clouding of the cornea of ​​the eye, sometimes blindness.

(Photo: Liver of a dog that died of HCC. Severe inflammation of life due to virus replication in the liver cells.) 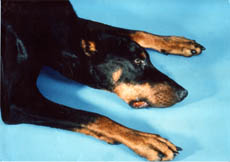 Leptospirosis pathogens, also known as Stuttgart dog disease or Weil’s disease, are bacteria living in water (leptospira). They penetrate the body through the skin and mucous membranes and reach almost all organs via the blood. The clinical symptoms are accordingly diverse: fever, vomiting, diarrhea, ulcerative changes in the oral mucosa, weakness, jaundice due to liver damage, decreased urine excretion due to kidney damage, breathing difficulties, paralysis. People can become infected if the urine of infected dogs gets on mucous membranes or skin wounds.

(Photo: Apathy and paralysis symptoms as a result of a leptospirosis infection) 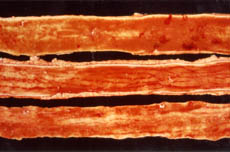 The clinical picture of parvovirus is different depending on the age of the dog. Puppies under three months of age often die suddenly from heart muscle inflammation with no further symptoms. Older dogs, on the other hand, show severe gastrointestinal inflammation with fever, severe vomiting and massive, usually bloody diarrhea. For young dogs, this form of course is also often fatal.

(Photo: Inside view of the intestines of a puppy who died of parvovirus. Massive bleeding due to virus replication in the intestinal mucosa.) 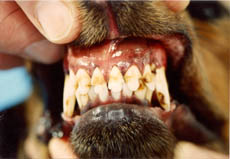 Distemper as the most well-known viral disease in dogs, shows a diverse clinical picture. After the initial symptoms of high fever, reluctance to eat and fatigue, various forms develop, which often merge into one another: the lung form (cough, difficulty breathing), the gastrointestinal form (vomiting, diarrhea), the nervous form (movement disorders, paralysis, cramps), the type of skin (blistered rash) and hardball disease (excessive keratinization of the ball of the soles and the surface of the nose). Permanent damage to survival of the disease are the so-called stagnation bite (defects in the enamel in the case of disease in the old age of the tooth change), behavioral disorders and epilepsy. Distemper has been increasingly observed again in recent years.

(Photo: Tooth enamel defects due to illness in puppyhood) 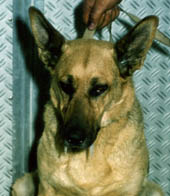 Rabies is caused by a virus that spreads around the world and is always fatal. All warm-blooded animal species, birds and humans are susceptible. The infection usually occurs through the virus-containing saliva when a sick animal is bitten, but infection through skin wounds is also possible. Since humans are also at risk, legal provisions apply to rabies in Germany (Rabies Ordinance). For unvaccinated dogs, the authority can even suspect infection, e.g. B. after contact with an animal infected with rabies, order the immediate killing.

A dog suffering from rabies is overexcited, extremely aggressive and vicious ("mad rage"). Later on, paralysis sets in, leading to hoarse barking, swallowing disorders (excessive salivation, foam in front of the mouth) and the tongue hanging out. Paralysis of the hind legs leads to a stuck position. The phase of “mad rage” can also be absent and rabies begins with the symptoms of paralysis (“silent rage”).