Who invented the first virus

A year after the first warning: What we know about the coronavirus

Ophthalmologist Li Wenliang from Wuhan Central Hospital was the first to share information about a SARS-type lung disease with colleagues. That was on December 30, 2019.

He distributed his warning to other hospitals among work colleagues via the Chinese social media platform WeChat. The police warned him about this. He spread "false comments on the Internet". He later died himself of COVID-19 on February 2nd. He was only rehabilitated post mortem by a commission of inquiry of the communist party.

The new coronavirus is officially recognized

At the beginning of the second week of January, the Chinese authorities first publicly announced that a novel virus was rampant in the city of Wuhan. Since then there have been almost 1.7 million infections in Germany, and worldwide there were more than 82 million by the end of December. Here is an inventory of what has become known about the coronavirus so far and how far medicine has advanced in the fight against SARS-CoV-2:

The origin of Corona

When the authorities announced the existence of the virus, it had been a few weeks since a human was first infected by a vertebrate. Initially, the authorities apparently tried to suppress information. To date, it is not exactly clear when and where the novel coronavirus jumped from animals to humans. Transmission from the bat to an intermediate host, perhaps a raccoon dog, and then to humans is considered likely. This is how the pandemic began, which is still in full swing today.

In the meantime, there is increasing evidence that Corona had already spread worldwide in the summer of 2019. For example, the virus could be detected in samples from Italy from September 2019.

Chinese virologists have deciphered the genetic information of the pathogen in record time. They published the genome structure as early as January 21, and a detailed description of the virus three days later. This enabled medical professionals and microbiologists around the world to begin developing drugs and vaccines.

The spike proteins (ACE-2) located on its surface are typical of the virus. These are crucial for binding to the host cell. Therefore, much of drug and vaccine development is focused on binding, blocking, or otherwise rendering this protein ineffective. 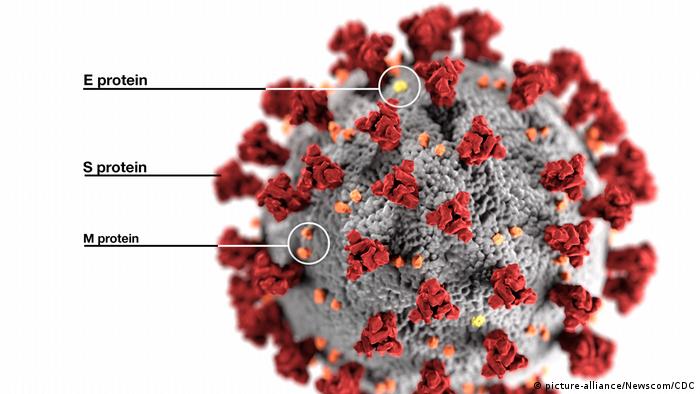 The coronavirus in the model: The most striking is the spike protein (S), which forms the typical crown spikes.

In the meantime it has been established - among other things through the Heinsberg study - that the virus settles in the throat and lungs in particular. The greatest risk of infection is next to direct smear infections from aerosols. These spread particularly well through air conditioning systems, as in the meat industry.

Closed rooms with many people are very dangerous. Therefore, lockdown measures, the closure of entertainment establishments and the cancellation of trade fairs and major events have also been very effective in containing the epidemic. The largest chains of infection can be traced back to so-called superspreader events.

The use of mouth and nose protection has meanwhile established itself in almost all countries in the world. However, many doctors initially question whether most people are even able to use it in everyday life in such a way that it can prevent potential virus transmission. Further protective measures are hand washing, keeping your distance and thorough ventilation.

Even if certain pets such as cats, ferrets and golden hamsters can become infected in humans, they play no detectable role in chains of infection. The situation is different with outbreaks in mink farms, which are of great concern to health authorities. Millions of mink therefore had to be killed in different countries.

Initially, the thesis was still circulating that the new virus was hardly more dangerous than seasonal flu. In the meantime, however, the doctors know better: In terms of its danger, the disease is more similar to the devastating Spanish flu of 1918. Although a SARS-CoV-2 infection can be symptom-free in many people, others become very seriously ill with COVID-19.

It cannot be clearly stated who is particularly at risk. People with previous illnesses, the elderly, people with blood group A and men are at greater risk.

Pathologists who examined COVID-19 victims were able to confirm that high blood pressure, diabetes, cancer, kidney failure, liver cirrhosis and cardiovascular diseases are among the most dangerous pre-existing diseases. In principle, however, a difficult course can affect everyone.

Mild forms of COVID-19 can act like a cold. Typical are throat pain, breathing problems and a loss of the sense of smell and taste. If the course is severe, however, it can lead to a life-threatening multi-organ disease.

Often these lead to sepsis - an often fatal overreaction of the immune system that attacks one's own tissue and organs. With the severity of the course of the disease, it therefore plays a major role how strongly the immune system reacts to the pathogen.

At the beginning of the corona pandemic, many patients with severe disease were artificially ventilated (intubated) early on and still died. In the meantime, intensive care physicians have moved away from standard ventilation again because the pulmonologists have established that artificial ventilation under overpressure can cause more damage than help in the lungs.

As long as patients are able to breathe on their own, they can get oxygen without being connected to a breathing apparatus. Intubation is only possible in an extreme emergency. In many cases, when the kidneys are severely damaged by COVID-19, dialysis is also necessary. The intensive treatment now also takes the other damaged organs into greater consideration.

The healing process can be accelerated in specialized clinics by administering antibodies from the blood of cured COVID-19 patients. Then the immune system takes up the fight against the virus in the body of the patient who received the donation from the donated blood.

More: Fact check: How deadly is the coronavirus really?

So far, no convincing drugs

So far there is no convincing drug against COVID-19. Remdesivir is a pharmaceutical drug that is known to shorten the course of the disease. That is why it is hotly contested in the market.

But it's not a miracle cure. It shortens the healing process by a few days in patients receiving oxygen. But it doesn't improve their chances of survival. The WHO recently removed it from its guidelines for the treatment of corona patients.

Doctors tried again and again to get other drugs on the market against the coronavirus into position. These include the anti-inflammatory drug dexamethasone. Studies have shown that this corticosteroid can reduce the mortality rate of critically ill patients who depend on oxygen by about a third.

Other hopes were the RNA polymerase inhibitor Avigan and the anti-malarial drug hydroxylchloroquine. The effectiveness and safety of the first have not yet been conclusively proven, the second has now been shown to not help.

How far is vaccine development?

The UK, US and EU regulatory authorities gave their green light for the first vaccines during December 2020. Further approvals are expected in the first few weeks and months of 2021. In addition, Russia and China have approved their own vaccines, some of which are also exported to third countries.

Mass production and the logistics involved in launching vaccination campaigns pose major challenges for health authorities and the pharmaceutical industry around the world. So-called mRNA vaccines, in which many doses can be produced relatively quickly, are advantageous here. However, experts do not expect the vaccination campaigns to be completed worldwide before 2022.

What else is in the pipeline?

According to the WHO, at least 233 vaccine projects have started worldwide. According to the research-based pharmaceutical companies, there are 246 (as of December 22, 2020). These are essentially divided into three types of vaccine: live vaccines, inactivated vaccines and gene-based mRNA vaccines.

Deutsche Welle has set up a vaccine tracker that always shows the current status. More information about the vaccines can be found here.

When it comes to RNA vaccines, doctors are breaking new ground because no such approved vaccines have existed before. Both vaccines currently approved in the USA and the EU are such mRNA vaccines.

These are the products of BioNTech-Pfizer (approved in the EU and the USA) and Moderna (USA, but approval in the EU is expected in the first few days of 2021).

Another vaccine from AstraZeneca was approved in the UK on December 30th. This is not an mRNA vaccine, but a dead vaccine in which a harmless chimpanzee cold virus is used as a carrier to introduce proteins of the SARS-CoV-2 virus, which then trigger an immune response.

There is also an approved tuberculosis vaccine that is not directed against SARS-CoV-2, but strengthens people's innate basic immunity. Researchers at the Max Planck Institute for Infection Biology in Berlin are currently trying to genetically improve this.

When does herd immunity occur?

More and more people around the world are becoming infected. By the end of December there were more than 82 million people. The world population of 7.8 billion is still a long way from the diseases leading to relevant immunity.

In addition, it is unclear whether recovered patients will remain permanently immune to the virus. A serological test from the blood can be used to determine whether someone has antibodies against the virus. A swab with a cotton swab can use a gene test to clarify whether someone is acutely ill and contagious.

This article has been updated several times, most recently on December 30, 2020