What is learned from immunology

Immunobiology is the study of the body's own defense mechanisms against pathogens. Some of the defense mechanisms are present from birth, others are only learned in the course of life. In this article we explain the difference between the unspecific and the specific immune defense.

There are roughly two different types of immune defense:

Nonspecific immune defense
The body's unspecific immune defense consists of two different lines of defense. The first is formed by mechanical and chemical barriers that prevent pathogens from entering our body. Above all, there is the human skin, which protects more vulnerable tissues from external influences. The pH value in the stomach or saliva and tears also serve, among other things, the immune defense. The second barrier is formed by a group of unspecific cells in the event that a pathogen manages to penetrate the body: a group of different white blood cells. The white blood cells are formed in the red bone marrow and usually only live a few hours. They destroy pathogens through phagocytosis, i.e. ingest the pathogen through endocytosis and digest it with the help of lysosomes.

Most important white blood cells of the unspecific immune defense:

White blood cells are transported in the body via the blood system and via the lymphatic system (a vascular system that transports fluids). As a result, the cells are distributed throughout the body and can protect the body from pathogens.

Inflammation is also one of the defense mechanisms of the unspecific immune defense if the pathogen has already penetrated the body through a cut, for example. The blood vessels then increase their permeability and the temperature increases so that the immune system can respond more quickly to the threat. The formation of pus then ensures that cells and lymph fluid are removed.

A distinction is made between two different types of white blood cells of the specific immune defense according to where they originate:
1. the T-lymphocytes (formation in the thymus until puberty)
2. the B lymphocytes (formed in the bone marrow)

They ensure that in the event of a pathogen attack, antibodies are produced that exactly match the antigens, which are specific surface proteins on the pathogen's membrane. The antibodies are distributed in the blood and ensure that the pathogen cells clump together. These can then no longer multiply and are phagocytosed by. This type of immune response is referred to as humoral defense. So-called T helper cells, which are a special form of T lymphocytes, are involved in the transmission of information. If they encounter an antigen-presenting cell (for example a macrophage), a special interaction takes place, which ensures that the T helper cell divides and a very specific clone of the T helper cell is created that is geared towards these antigens. This clone then activates the B lymphocytes, which form plasma cells, which then produce antibodies against precisely these antigens. B-lymphocytes are also responsible for the production of memory cells. If the pathogen infests again, these can directly produce specific antibodies.

They also have specific surface structures, the T-cell receptors. However, these are not released into the blood. That is why one speaks here of the cell-mediated immune defense. This is primarily responsible for recognizing and eliminating infected cells in the body. This also happens again via special surface structures that are represented by infected cells. If a T-lymphocyte meets a T-helper cell that represents an antigen, the T-lymphocyte is activated to a cytotoxic cell. This differentiates itself
then to an active killer cell and produces a protein that destroys the cell membrane of infected cells. 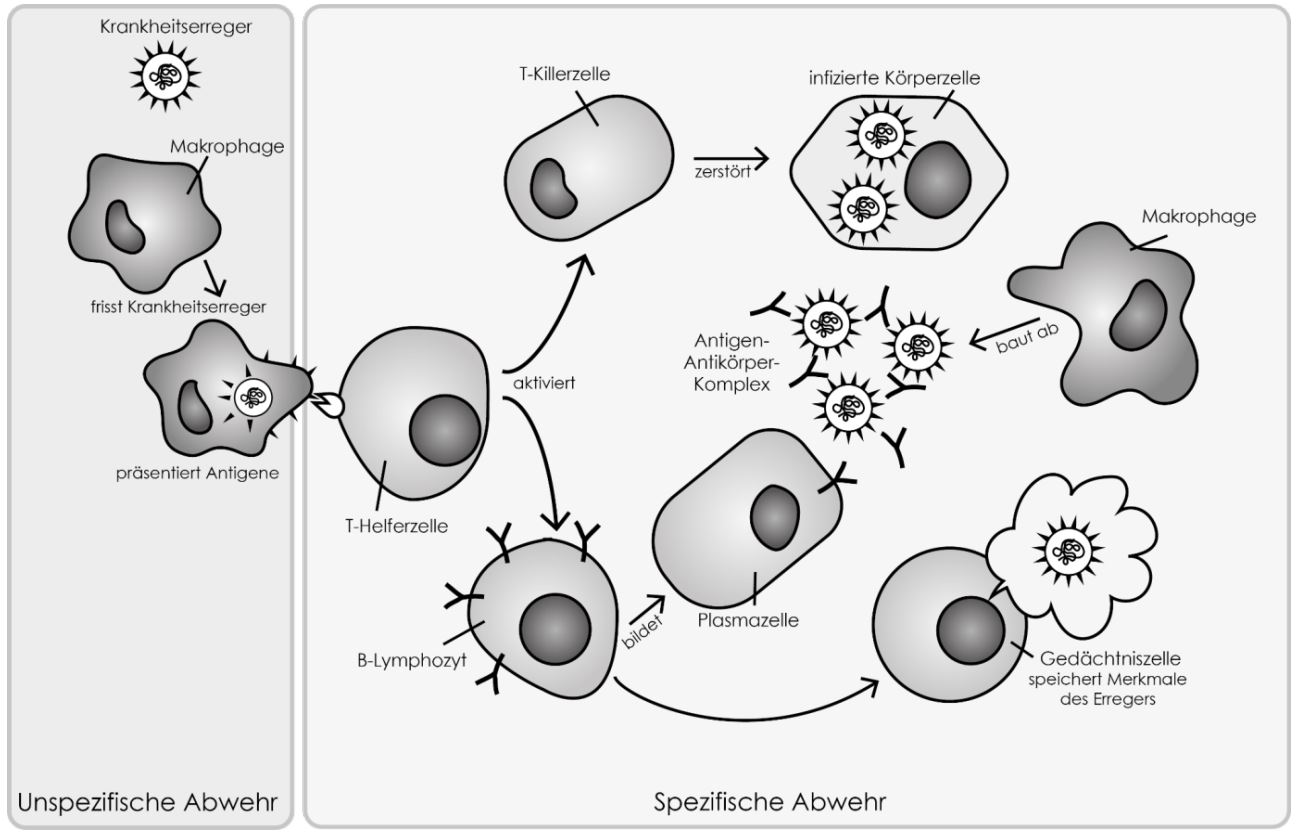