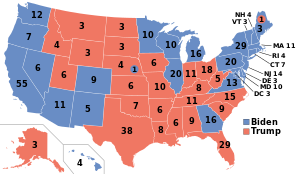 This card shows the election result. You can also see the individual states and their electors on it. The blue states went to Biden, the red to Trump. Biden won 306 electors, Trump 232.

On November 3, 2020, the United States of America elected the country's president for the years 2021 to 2024. Joe Biden emerged victorious from this election. He ran for the Democratic Party. Biden was already Vice President of the country and was part of President Barack Obama's administration. Biden's victory makes a woman the new Vice President: Kamala Harris.

Biden's opponent was the previous President Donald Trump, who would have liked to rule for another four years. He ran for the Republican Party. Trump's Vice President Mike Pence also wanted to be re-elected.

There are also smaller parties in the USA, but they don't stand a chance against the big parties. That is why almost no one “wastes” their vote on a smaller party. One prefers to vote for the one big party whose program is more appealing to one.

Before the election, the candidates campaigned. They traveled across the United States, gave speeches, attended events and tried to convince people of themselves. However, due to the coronavirus, Joe Biden campaigned mostly from his home via video. The TV debates were an important event of the election campaign. There both candidates appeared on television and discussed with each other. The first discussion in this election campaign was very heated. Shortly afterwards, Donald Trump fell ill with the corona virus and had to go to the hospital. He had to cancel the performances of the following days. But he quickly recovered.

How does the election work?

The choice itself is a bit complicated, still like it was almost 250 years ago. The president is not elected directly by the citizens of the United States; each state sends electors. These then determine the president. The number of voters depends on the population: California has a very large population and is allowed to send 55 voters. Alaska has only a few residents and is allowed to send three voters. The electorate cannot vote however they want, but have to stick to whom the citizens of the state would like to have as president. All electors from a state must campaign for the same president.

In some states, especially in the south, Trump had the electorate on his side. In other states like California or New York, the people voted for Biden. Then there are the so-called "swing states". In these states, the electorate is often very balanced. At the same time, many of these states have many electorates. That is why it is always particularly crucial who wins in these states.

Since everyone is always very curious about how the election will turn out, citizens are asked beforehand who they would vote for. In these polls, Joe Biden clearly won.

How did the election go?

On election night, Trump was initially able to win many states. Surprisingly, he also won the Ohio and Florida swing states, where polls believed Biden would win. In other swing states such as Pennsylvania or Michigan, too, he had a large lead of several 100,000 votes on election night.

Due to the corona pandemic, many Americans decided to vote by post. These voices arrived at the counting rooms a little later. Nevertheless, Trump already declared himself the winner in a speech to his supporters. He wanted this result to remain and demanded that the counting of votes be stopped. With this request he turned to the courts in various states. Some complaints were quickly dismissed, others later.

In the next few days, Biden was able to catch up a lot, as there were many Democrats among the postal voters. He won the important states of Michigan and Wisconsin, where Trump had led for a long time. By November 7th, Pennsylvania was largely up and Biden's victory was all but clear. Various media then announced his victory.

The matter was not really fully decided until the courts had settled all objections. In addition, you had to count in different states because the result was tight. But that didn't change the result either. The electors elected the president on December 14th. The result was announced on January 7th. Biden emerged victorious with 306 votes. Trump only got 232 votes. On January 20, Biden was installed as the new president. He then took his oath of office. Kamala Harris was sworn in as the new Vice President.

What was special about this choice?

Two months after the election, protesters broke into the Capitol, this parliament building.

What was unusual about this election was that the previous president did not recognize the clear result. He also infected his followers with it. There was a large demonstration in front of the Capitol in Washington on January 6, 2021. On the day it was about the parliament confirming the result of the election. Many Trump supporters even stormed the parliament building and wreaked havoc there. The MPs had to get to safety and could not continue their work until the police cleared the house.

Even when the electoral vote was counted, some Republican MPs tried to invalidate the result. However, they did not succeed, so that Vice President Mike Pence was able to announce the final result. Trump spoke of election fraud even after the result was announced on Twitter.

The Klexikon is like a Wikipedia for children and schoolchildren. The most important things explained simply, with definition, many pictures and maps in over 3000 articles. Basic knowledge suitable for children, everything easy to understand and good for presentations in school.
<?