Since July 1994, the maritime component of the Federal Police has been part of the “Coast Guard”, a coordination group of federal enforcement officers at sea, which includes customs, water and shipping administration and fisheries protection.

Since 01.01.2007 the Federal Police has been represented as a security partner in the Joint Situation Center See (GLZ-See) of the Maritime Security Center (MSZ) in Cuxhaven. In the GLZ-See, the operational units of the federal government and the coastal states work together in the structure of an "optimized network" (maritime situation center of the accident command, the water and shipping administration, the control center of the water protection police of the coastal states as well as the operations control center of the federal lake police, customs and the fisheries inspection).

The exchange of information, the coordination of operational resources and mutual support in special situations are optimized in the GLZ lake. The existing responsibilities of the individual authorities remain unchanged. 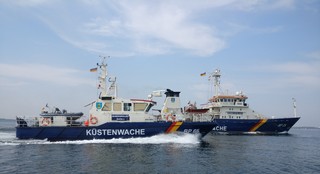 The distinguishing features of ships and boats deployed in the Coast Guard are: