Is Peru a forgotten country

Peru at a glance

The Spanish conquerors were looking for their Eldorado with all the glittering gold and magnificent cities. Today's visitors are satisfied with impressive natural and cultural treasures - and Peru has plenty of them to offer. Costa, Sierra, Montaña and Selva form the "big four" of Peru. Four landscape areas that have it all and offer the traveler an abundance of cultural and natural highlights. 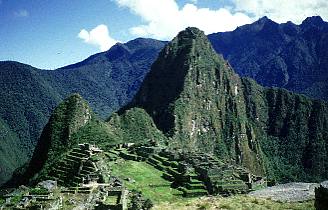 Costa refers to the up to 140 km wide coastal area on the Pacific with its deserts, the archaeological evidence of the Chimú and Moche cultures, the capital Lima and offshore bird islands.

The Sierra is criss-crossed by spectacular Andean high basins and peaks, attracts visitors with ancient Inca sites such as Machu Picchu and nature reserves such as the Parque Nacional Huascarán - here: Cordillera Blanca and the 6,768 meter giant Huascarán. Not to forget the volcanic world around and the 8,300 km² Lake Titicaca, which is shared by Peru and Bolivia and which is interspersed with islands such as the Isla de los Uros (Uro-Indios) and the Isla de Takile (overnight stays for visitors); The starting point for island tours is Puno.

Selva means "primeval forest" and includes the sultry, green Amazon lowlands of the east (called "Montaña", mountains on the wooded mountain flanks) with all its adventurous waterways, lush tropical vegetation and nature reserves such as the Reserva Nacional Tambopata, which can be reached from Puerto Maldonado Candamo, the Parque Nacional del Manú and the Santuario Nacional de Pampas de Heath. The most important city in the jungle is where numerous organized jungle trips start. Iquitos is cut off from the rest of the Peruvian world and can only be reached by air and river. 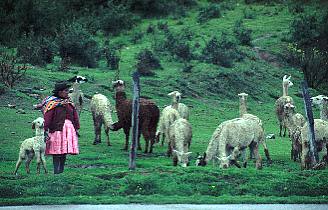 Lama driver in the Andean highlands near Sacsayhuamán

In Peru, nobody can get around Lima. In the midst of this eight-million-person juggernaut, which has also merged with the anything but homely port city of El Callao, you should pick the highlights very carefully. Although the old town has been declared a World Heritage Site by UNESCO because of the large number of its historical buildings, Lima does not deserve longer stays. A must-see for everyone is the Plaza de Armas, with its flowerbeds, where the government palace and cathedral are located. At a corner of the plaza rises an equestrian monument in honor of the Spanish conquistador Francisco Pizarro, who founded Lima on a January day in 1535 to concentrate the reign over the conquered Inca empire. Three years earlier he had landed with a small group of adventurers in Tumbes in northern Peru, had the Inca Atahualpa executed in Cajamarca, had moved into Cusco and now needed a capital of the Conquistadores with access to the sea. The new heart of the South American empire in the "New World" was initially named Ciudad de los Reyes, "City of Kings". From the port of El Callao, the silver fleets soon set course for Spain. Pizarro itself brought little luck to the city. It turned out to be a fatal mistake that he had not only got the Indians out of the way, but also the conqueror and potential competitor for power in the gold country, Diego de Almagro. Almagro's followers murdered Francisco Pizarro in his home in Lima in 1541. A chapel in the cathedral, which was destroyed by an earthquake in 1746, contains Pizarro's remains.

More interesting than the cathedral is the San Francisco Convent on Plazuela San Francisco. A three-nave baroque church is attached to the upper floor of the Franciscan monastery, which began in 1542 and was rebuilt after a tragic earthquake in the 17th century. But the real fascination is underground: in the catacombs. Up until the construction of the large municipal cemetery at the beginning of the 19th century, tens of thousands of people found their final resting place there, initially exclusively clergy and later ordinary mortals of all classes. The poorer citizens, wrapped in simple blankets, were buried in round mass graves. Today there are macabre sights. In the large burial grounds, huge amounts of skulls and bones have been draped into decorative designs.

Numerous other convents and churches such as San Pedro and San Agustín represent the deep Catholicism that the Spaniards spread. How the "infidels" fared up to 1813 is shown in the Inquisition Museum with its eerie wax museum. In the name of the Lord, Dominican monks once pushed small kettles with glowing coals under the soles of their feet. A jewel among the museums: the Gold Museum, a bit outside, with its impressive collection of gold objects from pre-Columbian times. A number of mansions testify to the colonial wealth of the metropolis, above all the Palacio de Torre Tagle, built around 1735 and named after the treasurer of the royal fleet in El Callao. The two wooden balconies facing the street are particularly beautiful.

The municipal Herrera Museum (exhibits on the northern Peruvian Moche and Chimú culture) and Pachacamac, around 30 km south, a temple district that was built around 200 AD and has now been heavily restored, give a foretaste of Peru's high cultures. In Inca times a palace of the sun maidens stood here.

The Ballestas Islands, 230 km south of Lima, a rugged archipelago on the Bahía de Paracas with one of the highest concentrations of seabirds on earth, bring a change to the city and culture. Their digestive finals caused a guano boom in the 19th century. "Guano" comes from the Quechua language and means "dung", which here has a unique quality and serves as the basis for fertilizers. On boat tours to the Ballestas Islands (popularly: "Little Galápagos") you can see gannets and cormorants as well as sea lion banks, from which an enormous level of noise and smell penetrates the visitors. Cultural reference near the Ballestas Islands: the candelabra, an enigmatic scratching image of an enormous size of 130 m high and 75 m wide. 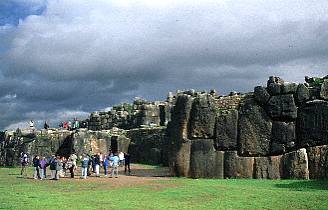 Deep inland, around 1100 km south-east of Lima, at an altitude of 3400 m you enter a gigantic Andean basin: the basin of Cusco, the "archaeological capital of America", which is part of the cultural heritage of humanity. The legendary Manco Kapac chose this barren, originally far-flung highlands as the center of the Inca dynasty he founded around the year 1200. And from then on they put their stamp on Cusco, the "navel of the world" of their great empire Tahuantinsuyu. Today's 300,000-inhabitant city was the seat of the nobility and the almighty, deified sovereign, the direct descendant of the sun. Under him - embedded in strict hierarchies - a perfectly organized state structure spread out. It goes without saying that Cusco combined the most magnificent buildings. The gold-greedy Spaniards, who razed almost everything to the ground, tore gold cladding from the temple walls and built houses, churches and palaces on the foundations of the Inca buildings, were a hit. They transformed Cusco into an episcopal and university city, which is still dominated by colonial flair around the Plaza de Armas. And right in the middle: the vibrant street markets of the Indios, which sell woolen sweaters, ponchos, jackets and stockings for sale in the evening and at night. High above the basin of Cusco, the most popular close-up excursion leads to the Inca fortress with its massive stone blocks. It is said that in the 15th century, 20,000 workers took 30 years to build Sacsayhuamán.

Cusco has always been a stepping stone to Machu Picchu, that magical Inca city in the Andes. The train takes around 110 km to the train station of Aguas Calientes and buses take countless serpentines up to Machu Picchu. From the railway station "km 88", mountain hikers tackle the legendary Inca Trail to Machu Picchu and in between they reach an altitude of 4200 m.

Spectacularly set in the Andean scenery, Machu Picchu sits enthroned at almost 2400 m above the valley of the Urubamba River and is still shrouded in secrets today. It was the forgotten city of the Incas, which was only rediscovered in 1911 by the American researcher Hiram Bingham. Bingham had set out for the heart of the Andes to find the last capital of the fugitive Incas, which the Spanish had not discovered. In the shadow of the sugar-hat-shaped guardian peak Wayna Picchu, the city is made up of around 260 different, tiered structures. Remains of the temple of the sun and the temple of the three windows have been preserved on buildings, and the astronomers made their observations in the solar observatory.

Even if Machu Picchu is unique, Peru unites other archaeological sites of importance. For example Chavín de Huantar, from 1400-400 BC. Center of the Chavín culture of the northern highlands. Impressive evidence of the desert cultures can be found near Nazca and Trujillo. There are mysterious lines and desert scraps up to 300 m in size, which are part of the world cultural heritage and can best be overlooked on sightseeing flights, across the desert near Nazca. The pictures had ritual and astronomical significance and were probably made 1500 years ago. Close to the Spanish colonial city of Trujillo, on the northern coast, there are significant evidence of the Moche culture (100 BC-600 AD) with the pyramids of the sun and the moon, as well as - in the form of the extensive ruined city of Chan-Chan - architectural legacies of the Chimú culture, the from 11-15. Century experienced its greatest heyday.

Reports
- In the sign of the sun. Into unknown Peru
- Motokars on the Malecón. Out and about in Iquitos
- Arequipa - the secret capital of Peru 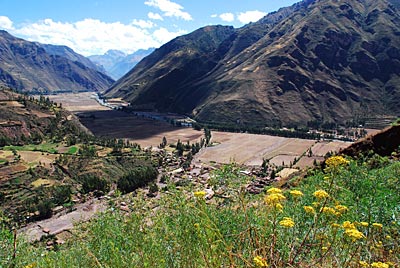