How does the Eurofighter Typhoon work

When DASA test pilot Peter Weger took off from Manching on March 27, 1994 for the 40-minute maiden flight of the Eurofighter prototype DA1 (98 + 29), it was clear to him that he was sitting “in an unbelievable airplane”. Even today, every pilot can confirm the positive impressions of the handling and maneuverability of the combat aircraft with enthusiasm. “From a purely aeronautical point of view, the Eurofighter is very easy,” said an Air Force pilot. "It is therefore primarily a matter of mastering the overall system" with its many possibilities. After all, the fighter jet should have "swing role" capabilities, meaning that it should be able to switch between aerial combat and attacking ground targets in a matter of seconds at any time during the mission.

Achieving this goal was not easy, because although all Eurofighters look like an egg to the other, a lot has changed in terms of systems and armament. So much in any case that, for example, the first 148 aircraft can no longer be brought up to the standard of tranche 2 economically due to differences in structure and main computers. 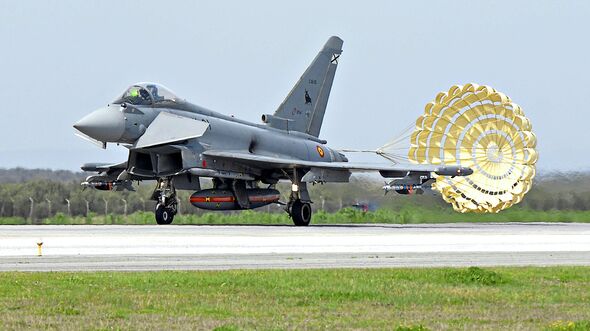 Eurofighter
Spain has 73 Eurofighters. The planes are stationed in Morón, among other places.

The 236 aircraft in Tranche 2 that have been delivered since October 2008 have received around 400 changes. But this series is not homogeneous either, because with blocks 8, 9, 10, 11 and 15, improvements have been made over and over again, especially with regard to the software. For this purpose, the complex phase 1 enhancement program (P1E) has been carried out since 2007, which was broken down into two parts (P1Ea and P1Eb) due to its complexity. The full integration of the precision bombs EGBU-16, GBU-10 / GBU-16 and Paveway IV as well as the laser target container Litening III was achieved. There were improvements in radio data transmission (MIDS) and in the autopilot. The on-board cannon can now also be used against ground targets, and the range of application of the IRIS-T has been significantly expanded through a digital connection. Targets can be assigned using the helmet visor: Flight testing of the P1E improvements was completed in autumn 2013.

Aircraft for Qatar with new radar

The evolution of the fighter continued with the serial production of the 112 machines in Tranche 3A (plus export) in order to improve its competitive position. On the cell side, changes were made in two areas: On the one hand, there are now mounting points on the fuselage for additional tanks (no order yet), and on the other hand, the bow has been modified to accommodate the AESA antenna of the Captor-E radar in the future. This consists of over 1000 transmitter / receiver modules and can be rotated so that air and ground targets can be detected without delay using electronic beam swiveling in a field of vision of 220 degrees. The Euroradar consortium had been working on the AESA model with company funds for years before the partner nations signed a one billion euro development contract in November 2014. However, a decision has not yet been made about the procurement, so that Qatar, as an export customer, will probably be the first country to receive the new radar.

In addition to the radar, the long-range Meteor air-to-air guided missile from MBDA will significantly improve the capabilities of the Eurofighter. Thanks to the ramjet engine and modern radar seeker head, it will be able to shoot down enemy aircraft in an area that, according to the manufacturer, should be three times larger than the previously used AIM-120 AMRAAM from Raytheon.

Aeronautica Militare
Southerners in the far north: Italy has already sent its Eurofighters to the Baltic States and Iceland (photo) for air surveillance.

In the future, the Eurofighter will also be able to fight important targets on the ground such as radars, bunkers or bridges at great distances. To do this, cruise missiles like the Storm Shadow have to be integrated. In this regard, the hydrofoil tests began at the end of 2013 in order to sound out the aerodynamic influence of the large, 1.3-ton guided missiles. Another armament alternative is the small anti-tank guided missile Brimstone from MBDA, with which the first test shots were carried out in early July 2017.

Since the Air Force's Eurofighter is also being offered as a successor to the Tornado fighter-bomber, the American B61 atomic bomb would also have to be integrated. In addition, greater connectivity, sensor and data fusion, significantly larger screens (or just one large screen) in the cockpit and up to 15 percent more power for the aircraft's EJ-200 engines would certainly be desirable in the coming years. Overall, like other fighter jets, the Eurofighter will continue to be improved over its entire service life until well after 2030 in order to fully exploit the potential of the cell and to respond to new challenges. 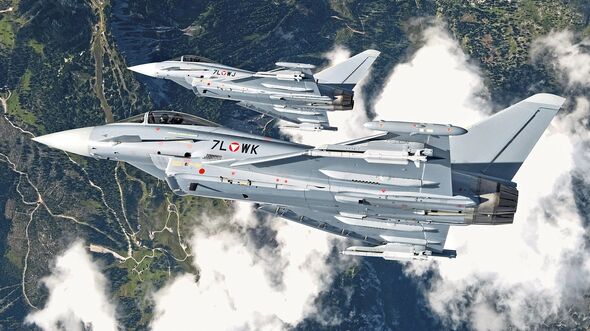 Geoff Lee / Eurofighter
Austria bought 15 machines and opted for tranche 1 for cost reasons, but its operation is still too expensive for the Alpine country.

The roots of the Eurofighter go back to the 1970s

The concept of the Eurofighter will then be over half a century old. The considerations for a new European fighter aircraft had already begun in the 1970s, when, for example, MBB presented the concept of its fighter aircraft design with delta wings and canards at the ILA aviation fair in 1978 (TKF90 / tactical combat aircraft of the 90s). In December 1983 the air force chiefs from Germany, France, Great Britain and Spain approved an “Outline European Staff Target” for a FEFA (Future European Fighter Aircraft), in October 1984 the “European Staff Target” followed as the basis for further industrial studies.

On August 2, 1985, Germany, Great Britain and Italy finally signed a contract for the realization of the Eurofighter. Spain joined the program a month later, while France left. On the industrial side, Eurofighter Jagdflugzeug GmbH was founded as the main contractor on June 1, 1986, with British Aerospace (now BAE Systems), MBB, CASA (now part of Airbus) and Alenia (now Leonardo) as shareholders. She received the development contract in November 1988, which, as mentioned at the beginning, led to her maiden flight in March 1994. In the meantime the wall had fallen, Germany was reunified, the Soviet Union had disintegrated and the Cold War seemed to be over. In Germany in particular, this led to heated debates about the usefulness of the program and various alternative studies. Quite apart from that, European community programs promise ever lower costs for the partners, but are not easy to control due to internal wrangling and special requests. 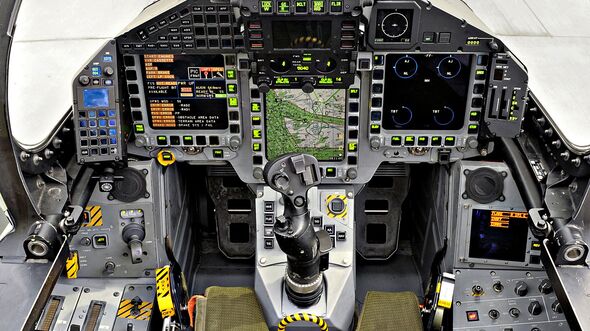 In any case, it took almost another decade and many hours of testing with seven prototypes until the first series aircraft left the final assembly lines in Manching (EADS), Warton (BAE Systems), Turin (Alenia) and Getafe (EADS CASA) in 2003. In Germany, the technicians in Kaufbeuren were first trained on the new model and some pilots were trained by the manufacturer before the Air Force officially put the first Eurofighters into service with Jagdgeschwader 73 in Laage on April 30, 2004. In addition to the four partner nations, five export customers have now also ordered the Eurofighter, including Austria. The Alpine republic was a prime example of how difficult and lengthy combat aircraft procurement programs can be - especially when the government changes in between. Originally, Eurofighters of Tranche 2 were to be bought, but then, due to alleged savings, it was decided to take over fifteen Tranche 1 machines - some of which were used by the Air Force. Deliveries of the aircraft stationed in Zeltweg finally began in July 2007. 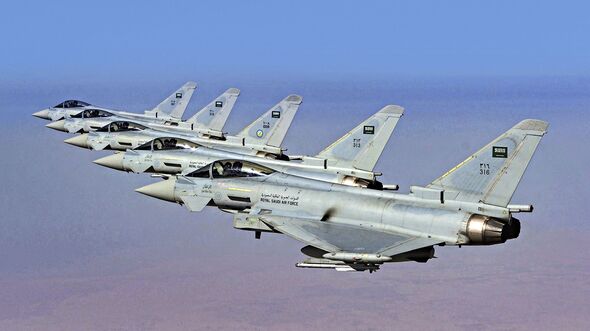 Jamie Hunter / Eurofighter
Saudi Arabia is an important customer of the Eurofighter and even planned the final assembly of the aircraft in their own country. The manufacturer is hoping for an additional order soon.

Export successes in the Middle East

In addition to Austria, the Eurofighter has so far been particularly successful in the Middle East. Saudi Arabia signed a contract for 72 aircraft in August 2006, followed by Oman in December 2012 and Kuwait in April 2014. An order from Qatar for 24 aircraft finally took effect in September 2018 after BAE Systems received the first funds. Deliveries are scheduled to begin in 2022.

Thus 623 Eurofighters have now been ordered, a number that lags behind the original plans of the four partner nations alone (Germany and Great Britain 250 each, Italy 165 and Spain 100). Around 550 machines have been built so far, and by November 2018 they had completed 500,000 flight hours, with a safety record that was previously hardly thought possible. The Air Force has not yet had a crash.

Despite all the problems and cost overruns, the Eurofighter is a cornerstone of the European aviation industry. It should stay that way in the future too, because according to Volker Paltzo, the managing director of Eurofighter Jagdflugzeug GmbH, “the Eurofighter Typhoon is the best platform to integrate, demonstrate and certify a whole range of technologies and use them as a mature capability ..] "to advance the development of a future European fighter jet.